About
Seat Belts
Distracted Driving
Impaired Driving
How To 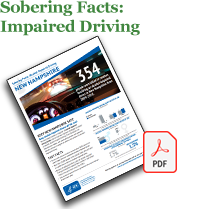 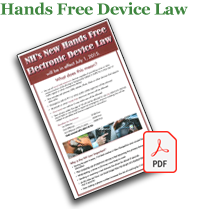 Impairment continues to be a leading cause of motor vehicle crashes. In recent years, almost 40% of all crashes in New Hampshire involved driver impairment. From 2009-2018, 354 people were killed in crashes involving an alcohol-impaired driver in New Hampshire. Driving while impaired by any substance can be deadly.

According to the U.S. Department of Transportation impaired driving is defined as operating a motor vehicle while under the influence of alcohol and/or substances.2

Often when we think of impairment, we think of alcohol. In recent years, the opioid crisis in New Hampshire has resulted in increasly higher numbers of impaired drivers.2 Impaired Driving can also occur when someone drives while under the influence of legally prescribed and/or over the counter medications.2 Additionally, as many states across the country legalize recreational marijuana, it is increasly easier to obtain and its effects are often misunderstood. It is important for teens to remember that if a driver’s mental state is altered by marijuana, they are driving impaired.3

The Effects of Blood Alcohol Concentration

Below is a social change PSA created by the National Highway Traffic Safety Administration stressing the fact that “If You Feel Different, You Drive Different” and noting the fact that driving under the influence of marijuana is grounds for arrest and a DUI charge. According to the Students Against Destructive Decisions (SADD):

Being a responsible driver is simple. It is illegal for teens to consume alcohol or use substances, but if you find yourself in a situation here are some tips:

If you see an impaired driver on the road, contact law enforcement. Your actions could help save someone’s life.